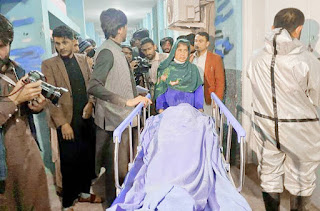 UMMATIMES - A total of three media company workers were shot and killed in the city of Jalalabad, eastern Afghanistan on Tuesday (2/3). The victims are thought to be a new target group to spark tensions in the war-torn country.
all three victims died in two separate attacks. They were shot on the way back to their homes. said the Director of Enikass TV, Zalmai Latifi.
"They all died. They were going home from the office on foot when they were shot," said Latifi.
Nangarhar Provincial Hospital spokesman Zahir Adel also confirmed the number of victims. Previously, journalists, religious scholars, activists and judges were the target groups in a wave of political killings.
An armed suspect has been detained following the shooting. Meanwhile, other perpetrators are still being hunted. Said Chief of Police Nangarhar Juma Gul Thrifty
"We arrested him while he was trying to escape. He has admitted that he carried out the attack. He is a member of the Taliban," Hemat said
A Taliban spokesman denied this claim. This group claims not to be involved in the murder.
As for the murder cases in Afghanistan have increased since peace talks between the government and the Taliban emerged last year. This latest step is taken to end decades of conflict.
Afghan and US officials have blamed the Taliban for the wave of violence in the country. However, the Taliban group denied this accusation.