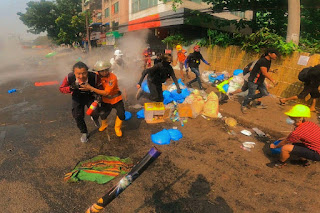 UMMATIMES - Two demonstrators were reportedly shot dead by Myanmar police during a protest in Yangon on Friday (12/3) night. The deaths of the two demonstrators were reported by local Myanmar media. It was stated that at least two demonstrators were killed in a shooting by police in the Tharketa district, Yangon, on Friday (12/3) evening local time.
Local activists are calling for more anti-coup rallies on Saturday (13/3) local time. The call for more anti-coup rallies came on the anniversary of the death of a student in protests against the government in 1988.
One of Myanmar's local media outlets, DVB News, reported that police opened fire on a crowd of demonstrators who had gathered outside the Tharketa police station, demanding the release of those arrested.
Posters distributed via social media called for people to take to the streets to protest against the military junta and simultaneously marked the anniversary of the death of Phone Paw, the student who was shot dead in 1988 inside what is now known as the Rangoon Institute of Technology campus.
The shooting of Phone Paw and another student who died weeks later sparked widespread protests against the military government, then known as the 8-8-88 campaign because it peaked in August 1988. It is estimated that at least 3,000 people died as the military coped with violent protests. at the time.
Aung San Suu Kyi emerged as a democracy icon in the movement and she was under house arrest for nearly two decades. Suu Kyi was released in 2008 when the military began democratic reforms and Suu Kyi's National League for Democracy (NLD) won elections in 2015 and last year.
The advocacy group Association of Assistance for Political Prisoners (AAPP) reports that more than 70 people have been killed in protests across Myanmar since the coup.