UN Disappointed; Humanitarian assistance for Yemen is not fulfilled 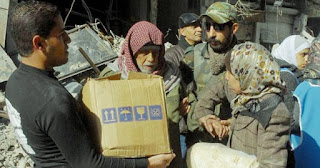 UMMATIMES - UN Secretary General Antonio Guterres is disappointed that aid is less than half of the US $ 3.85 billion needed by the United Nations by 2021 to avert large-scale famine in Yemen. the US $ 1.7 billion pledged by member states on Monday for humanitarian assistance in Yemen.
"For most people, life in Yemen is now unbearable. Childhood in Yemen is like hell. Yemeni children are starving," said Guterres as he opened an aid commitments conference for Yemen.
After the conference concluded, Guterres called the conference results disappointing and warned that "Cutting aid is a death sentence."
About 16 million Yemenis, more than half the population of the Arabian Peninsula country, are starving, says the United Nations. Of these, 5 million are on the brink of starvation, said UN aid chief Mark Lowcock.
"This does not solve the problem," "It is impossible with limited funds to prevent large scale famine." Lowcock said after the aid commitments conference for Yemen.
Among Yemen's humanitarian aid commitments raised on Monday were Saudi Arabia with US $ 430 million, the United States with US $ 191 million, the United Arab Emirates with US $ 230 million and Germany with US $ 240 million.
About 80% of Yemenis need assistance, with 400,000 children under the age of 5 experiencing severe malnutrition, according to UN data. For most of its food, the country relies on imports that have been deeply disrupted for years by all warring parties.
UN officials are trying to revive peace talks, and new US President Joe Biden says Yemen is his administration's priority, stopping US support for the Arab coalition's military campaign and demanding an end to the Yemen war.