UN; a total of 50 People Killed in Myanmar Coup

UMMATIMES - The death toll on Wednesday came as a surprise. "Now more than 50 people (have died) since the coup started and many are injured," said Christine Schraner Burgener, UN envoy to Myanmar, March 4, 2021. 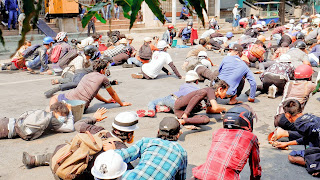 38 people died on Wednesday. It will be the bloodiest day since the coup when the military tried to quell protests from the Myanmar people. said Christine Schraner Burgener, UN Envoy to Myanmar.
Christine Schraner Burgener said: About 1,200 people have been detained in Myanmar since last month's coup and many families are not aware of their health condition or whereabouts.
"How can we look at this situation for longer? Every tool available now is needed to stop this situation. We now need the unity of the international community, so it is up to member states to take appropriate action, "said Burgener.
Burgener said he had spoken to Myanmar's deputy military chief Soe Win and warned him of a crackdown from several countries and isolation over the coup response.
Schraner Burgener last spoke with him on February 15 and is now communicating with the Myanmar military in writing. "When I also warned them to go in isolation, the answer was: 'We have to learn to walk with just a few friends'," said Burgener.