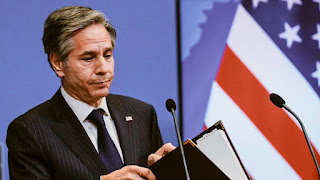 UMMATIMES - The US Secretary of State, Antony Blinken, warned that China's retaliatory sanctions against two Americans over the Uighur case were baseless. Blinken also highlighted the alleged genocide that is said to have occurred in China's Xinjiang region.
"China's efforts to intimidate and silence those who speak of human rights and fundamental freedoms only contribute to increased international scrutiny of the genocide and crimes against humanity that are taking place in Xinjiang," Blinken said in a statement. 3/2021).
Blinken spoke out after China announced sanctions against two Americans, a Canadian and a human rights advocate, in response to sanctions imposed this week by the two countries over China's treatment of the Uighur minority.
Blinken described the sanctions against the two members of the US International Religious Freedom Commission as "baseless".
According to the Human Rights group, at least one million Uighurs and people from other minority groups have been detained in camps in China's Xinjiang region. The Chinese authorities are accused of forcibly sterilizing the women there and doing forced labor.
The European Union, Britain, Canada and the United States have sanctioned some members of the political and economic hierarchy of Xinjiang over the allegations. This attitude prompted China to launch retaliation in the form of sanctions against individuals from the European Union and Britain.
"We stand in solidarity with Canada, the UK, the European Union and other partners and allies around the world in calling on China to end human rights abuses and abuses against most Uighur Muslims and members of other ethnic and religious minorities in Xinjiang and release them. who was detained arbitrarily, "said Blinken.
France, Germany and other EU countries have summoned the Chinese ambassador to protest against sanctions imposed by China, including sanctions against five members of the European Parliament as well as two EU bodies and two think-tanks.
Today, China enjoys relatively close ties with the European Union, which has been silenced over it pursues a trade pact with the world's second-largest economy.
However, tensions arise as the European Union seeks to formulate a strategy against China at a time when Sino-US tensions arise.