US; Meeting With China Feels Different Compared to Other Countries 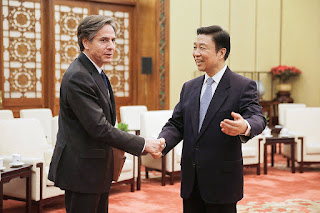 UMMATIMES - The heated discussion between America and China in Alaska is finally over. Even though it ended without a concrete decision, the Americans admitted that they had conveyed everything that needed to be said about China's action. This is related to issues of democracy, territory of sovereignty, and the military. Meanwhile, US Foreign Minister Antony Blinken stated that the meeting with China felt different from the meeting with South Korea and Japan.
"The impression I got from the meeting with Japan and South Korea was very different from the meeting with China," Blinken said at the end of the meeting with China.
As previously reported, the two-day meeting with China in Alaska is part of the US State Department's Asian tour. In recent days, America has met with its various allies in Asia to discuss the continuation of their cooperation plus future threats.
In the meeting with Japan and South Korea, the issue of China was not left behind. In Japan, the two countries discussed China's action in the Senkaku Islands, which is one of Japan's largest oil and gas reserves. China claims the islands as its own which neither Japan nor America can accept.
In South Korea, China was alluded to about its proximity to North Korea. China sees South Korea and America as one way to stop North Korea's nuclear development. This is because so far, direct diplomacy to North Korea for denuclearization has always failed.
All issues discussed in the meeting with Japan and South Korea were brought by America to the meeting with China. Meanwhile, America opened the meeting with a strong statement, accusing China of being a threat to global stability.
Not receiving it, China responded with a 15-minute statement accusing America in return. China considers America as a country that is in fact problematic in terms of democracy considering that there are still many cases of racism and human rights there. Therefore, China asked America to stop spreading its version of democracy. This statement made Blinken feel that the meeting with China was different than the meeting with Japan and South Korea.
"(There) I heard the satisfaction that America was back in contact with them. I also heard some concerns about the actions your (Chinese) government was taking," Blinken said.
Separately, Chinese Foreign Ministry spokesman Zhao Lijian said Blinken had provoked China to make a long statement. And, in his opinion, it is appropriate considering America made accusations which he considered baseless.
"It was America first that caused the tension. So, from the start, both sides were already sniffing the smell of gunpowder and drama. We didn't originally intend to give a long statement," said Zhao Lijian.
For the record, before America met with China, Uncle Sam's country imposed new sanctions on 24 Chinese and Hong Kong officials. This is related to changes in the electoral system in Hong Kong by the Chinese Parliament to ensure that government posts are only filled with loyalists. The move reportedly threatened the continuation of the US and Chinese meeting in Alaska.