US; Will Hold China Accountable to Follow the Rules 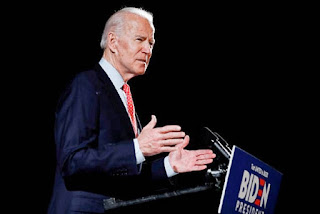 UMMATIMES - United States President Joe Biden said he would hold China accountable for following rules related to export, import and human rights issues.
Biden said earlier this month his side met with allies to ask to discuss China's demand for accountability in regional countries; Australia, India, Japan and the US. According to him, this meeting received China's attention.
"Soon, I will invite the democratic alliance to come here to discuss the future, and we will explain it to deal with these things, we will hold China accountable for following the rules, for following the rules," Biden said. 25/3).
There are currently tariffs on most goods shipped from China to the United States. The average rate was 19 percent - six times higher than before the trade war started in 2018, according to the Peterson Institute for International Economics. The American importer pays the tax.
Taxes have raised the price of items such as baseball caps, luggage, bicycles, TVs, sneakers and various goods issued by American manufacturers. According to US Customs and Border Protection, tariffs on Chinese-made goods have cost American importers more than $ 82 billion so far.
Apart from the issue of export-import, Biden also discussed the human rights issues that hit China, especially the Uighur ethnic minority.
He said his party was committed to promoting accountability for the Chinese government's human rights abuses, including the arbitrary detention and torture of Uighurs and other ethnic minorities.
"As long as you and your country [China] blatantly violate human rights, we will continue to attract the world's attention and clarify, clarify what happened," he said.
Earlier, the US had announced sanctions against two Chinese officials over serious human rights abuses against Uighur Muslims. According to him, this move has been coordinated with allies including the European Union, Canada and Britain, to impose sanctions on both.
The sanctions announcement was also to demonstrate greater unity between the US and its international allies. All voiced condemnation of Beijing's persecution of Uighur Muslims and other ethnic minorities in Xinjiang province.