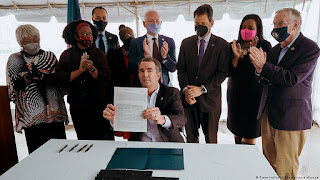 UMMATIMES - Virginia Governor Ralph Northam signed a law banning the death penalty on Wednesday (25/03). Virginia has carried out nearly 1,400 executions - more than any other US state - since 1608.
The state has also carried out the second-most executions, after Texas, since the US Supreme Court reinstated the death penalty in 1976.
"Signing this new law is the right thing to do," said Northam at the Greensville Correctional Center in Jarratt, Virginia, which has an execution room. "Virginia history - lots of things to be proud of - but not the history of the death penalty."

Racial bias in the death penalty

Northam also described the use of the death penalty in his state as "fundamentally flawed" and racially biased. "Black defendants have been sentenced to death disproportionately," he said. "We know that the system isn't always right," he said. "We cannot give the highest sentence without being 100 percent sure that we are right."
296 of the 377 prisoners executed by the state on charges of murder in the 20th century were black, Northam said.

The European Union welcomes all parties' move to abolish the death penalty, saying the policy is the latest development in a developing trend.
"The death penalty is incompatible with human dignity and the right to life, is inhumane and degrading treatment, and is not shown to have a deterrent effect," the EU said in a statement.
Virginia last executed a prisoner in 2017. Two men on death row in the state will now have their sentences commuted to life in prison, without parole.
In contrast, the administration of former President Donald Trump continued with federal executions during his term and sentenced 13 inmates to death between July 2020 and his departure from the White House in January. He has also changed the rules regarding executions by allowing execution by firing squad or poison gas. His successor Joe Biden has promised to abolish the death penalty at the federal level.