Myanmar Military; It was unexpected that the residents would resist the coup 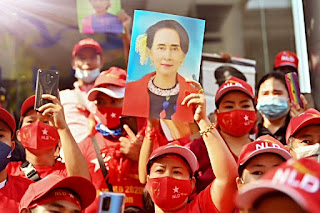 UMMATIMES - The Myanmar military thought their coup would go smoothly and the people calmly waited until new elections were held. This was revealed after he spoke with Myanmar military officials. Said the UN Special Envoy, Christine Schraner Burgener.
"They are very surprised that his plan to restore military leadership without popular resistance did not go according to plan," Burgener said.
Myanmar's military has not considered its plan to fail because of sanctions. As a result, a coup was carried out, they did not care whether they would be sanctioned or not. In fact, Burgener said, the Myanmar military was confident that it would still have allies in the midst of the pressure.
"When I warned them, their answer was that they are used to sanctions and have managed to survive. When I warned them they could be isolated, the Myanmar military said they would learn to survive with few friends," Burgener said.
The Myanmar military continues with its coup plans. The Myanmar military has five plans during the coup. Starting from the reform of the Election Management Committee to holding new elections. Regarding Myanmar citizens who consistently fought, the majority of the Civil Rebellion Movement was organized by Myanmar youths. They are used to living freely with them not wanting to return to the days of the military junta.
"They are well organized and really firm in their intention of preventing Myanmar from returning to a dictatorial regime and being isolated from the international community," Burgener said.
Burgener hopes that the international community will move together to punish the Myanmar military. Collective sanctions would be more effective in urging Myanmar's military to end the coup, release prisoners and restore democracy. "I ask the international community to unite, to take the right stance. Sanctions from the UN Security Council, which are implemented by all member countries, will be stronger than sanctions from one country alone," said Burgener.
Some countries that have imposed sanctions on Myanmar are America, Britain, Canada and the European Union. The US even recently imposed a new sentence, blocking trade activities of the Ministry of Defense, Ministry of Home Affairs, and two military conglomerates of Myanmar. The latest sanctions from America are in response to the massacres that took place in Myanmar. According to a report by the UN Human Rights Office, the Myanmar military killed 54 people and arrested more than 1700 during the coup