WHO; The Covid-19 investigation will be announced in March 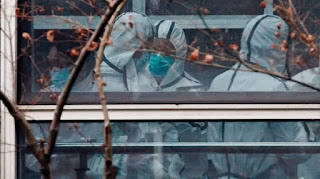 UMMATIMES - The cause of the covid-19 virus will be revealed by the World Health Organization (WHO) from the results of an investigation into the origins of the corona virus in Wuhan, China, mid-March.
The mission of the WHO expert team in Wuhan to find the origin of the emergence and spread of the corona virus has been completed after a month-long investigation in February.
"The timing is March 14-15," said WHO team mission chief Peter Ben Embarek during a press conference in Geneva.
Ben Embarek last month revealed that the animal-to-human disease said the virus probably originated in bats. But it is not certain how the virus got to humans.
"What their team has done is really working hard to try to get a full report so we can have a proper discussion," said WHO emergencies expert Mike Ryan.
The WHO team has been in Wuhan since January 14, under close surveillance by the Chinese authorities. The mission received an open letter from a group of scientists stating that they had no mandate to independence from all theories regarding the origin of the virus.
However, China's ambassador to the United Nations Chen Xu in Geneva said this was not an investigation, but a joint scientific research.