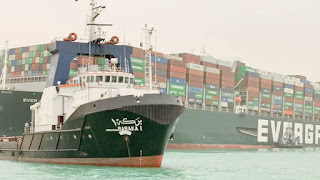 UMMATIMES - The world oil price suddenly rose after a giant container ship on the Suez Canal, Egypt got stuck. As a result, one of the world's busiest trade routes was blocked causing other ships to obstruct too.
Many have wondered how gigantic the ships operated by Taiwanese shipping company Evergreen Marine are. As reported by the BBC, Thursday (25/3/2021), the following is the description.

The giant container ship, named Ever Given, is four times the length of a football field, or about 400 meters long and 59 meters wide. As a result of running aground, dozens of ships on the Suez Canal were stuck in lines from both directions.
The ship, which weighs nearly 200,000 tonnes, can carry 20,000 shipping containers measuring 20 feet.
The ship was found to have run aground and stuck on an oblique position on Tuesday (23/03) at around 07:40 local time.
The ship, built in 2018, is known to be on its way to the port city of Rotterdam in the Netherlands from China, and is moving north through the canal to get to the Mediterranean.
According to the management company, they said "the immediate priority is to re-float the ship and resume sea traffic on the Suez Canal safely." Experts warn that the process can take days.

As reported by Reuters, concerns that the blockage could hamper crude oil shipments made oil prices rise 4% in international markets on Wednesday (24/3).
The energy intelligence agency Kpler said that more than 20 oil tankers carrying crude oil and refined products were affected by the congestion.
From local news sources, it said at least 30 ships were trapped north of Ever Given and three other ships in the South.
The Suez Canal is one of the busiest trade routes in the world. About 12% of the world's trade passes through the Suez Canal, which connects the Mediterranean to the Red Sea and provides the shortest sea route between Asia and Europe.
Evergreen Marine said the ship was "allegedly hit by a sudden strong wind, which caused the hull to deviate ... and accidentally hit the seabed and ran aground".
The container ship's manager, Bernhard Schulte Shipmanagement (BSM) confirmed on Wednesday that all crew were "safe and known to be", with no reports of injuries.
Eight tugboats are working to reload Ever Given, and diggers on land have removed the sand from where it got stuck to the side of the canal.
Dr Sal Mercogliano, a US-based maritime historian, told the BBC that incidents like these were rare, but could have "profound consequences for global trade".
"This is the largest ship ever to run aground on the Suez Canal," he said, adding that the ship was caught on an embankment and would lose its manpower and ability to maneuver.
"If they can't get him out ... at high tide, they have to start unloading the cargo," he added.