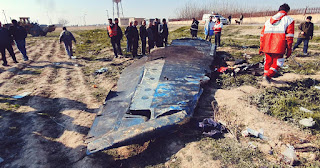 UMMATIMES - Iran on Tuesday said that 10 of its officials were involved in the crash of a Ukrainian passenger plane last year.
Military prosecutor Gholam Abbas made the announcement during a handover to Nasir Siraj who was elected to replace him as Iran's new military prosecutor.
Several days after the January 8 incident, Tehran admitted that "human error" or negligence caused the downing of the plane carrying 176 passengers.
In December, Iran promised to pay compensation of 150,000 US dollars to the families of each victim. The incident comes amid heightened tensions with the United States following the death of General Qasem Soleimani in Iraq in early January 2020.