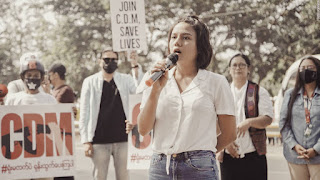 UMMATIMES - Myanmar's military government or junta issued arrest warrants for nearly 40 celebrities who defied its rule and supported the anti-coup movement.
Quoted from Channel News Asia, the 40 celebrities include social media influencers, singers and models.
The news was announced in the main evening news bulletin broadcast by state media on Friday and Saturday.
Furthermore, they are also deemed to have violated a law that prohibits individuals from saying things that can trigger dissent.
The threat of punishment imposed on violators of this law is a prison sentence of three years.
As previously reported, the Assistance Association for Political Prisoners (AAPP) said that 2,658 people had been detained by the junta.
Those detained include four women and a man who spoke to the CNN news agency.
Last week, CNN visited the main streets of Yangon City and interviewed the five civilians.
But later, when CNN returned to their residence, it received a report that the source had been detained.
A CNN spokesman said it would urge authorities to inform the whereabouts of the detainees. CNN also wants the detainees to be released safely and quickly.
"We urge the authorities for information on this, and for the safe release of any detainee," said a CNN spokesman.
Furthermore, AAPP said the death toll from the junta atrocities had increased to 557 people on Saturday (3/4/2021) night. In memory of the dead, anti-coup demonstrators lit candles at night on the streets.
In addition, in commemoration of Easter, local Christians wrote protest messages on Easter eggs, Sunday (4/4/2021).
Photos circulating on social media show the inscriptions on Easter eggs, including 'We must win', 'Spring Revolution'.
There is also an inscription 'Quit MAH', MAH in this case refers to the leader of the junta, namely Min Aung Hlaing.
The AAPP said demonstrators across Myanmar will continue to call for protests to end the junta dictatorship.
Demonstrators also want the restoration of democracy and human rights.
"People all over Burma continue to attack to end the dictatorship, for democracy and human rights," said the group's representative.
On Sunday morning, hundreds of people staged a protest in the city of Mandalay.
Pictures on social media showed some of them walking and others riding motorbikes.
Demonstrators also gathered in several other cities.
Although the police and army moved to disperse them, this time there were no reports of violence from the security forces.