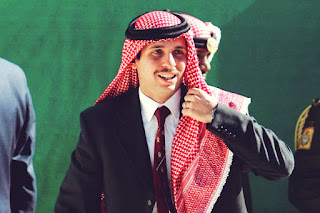 UMMATIMES - Hamza bin Hussein is in the international spotlight. King Abdullah II arrested and put him under house arrest because he was considered to threaten the stability and security of Jordan. In fact, he is said to have conspired with foreign intelligence agencies. However, who exactly is Hamzah bin Hussein? What made him a threat?
The following are some of the information about Hamzah bin Hussein that Tempo has collected from various sources, Monday, April 5, 2021:

1. Half brother of King Abdullah II

Hamzah bin Hussein is the half brother of King Abdullah II. He was born to King Hussein's partner with a woman who claimed to be his favorite wife, Queen Noor. Of course, as the son of King Hussein, he was initially included in the line of successor to the throne of the Kingdom of Jordan, aka the crown prince. However, in 2004, the title was separated from him.

2. Expelled From the Kingdom of Jordan

In 2004, King Abdullah II "expelled" Hamzah bin Hussein from the Kingdom of Jordan. At that moment, the title of crown prince was automatically released from Hussein. King Abdullah transferred the title from Hussein to his son. This step was taken by King Abdullah to consolidate power and support in the kingdom and at the same time dispel Queen Noor's hopes of seeing Hussein as king.

Although he no longer has the title of crown prince, Hamzah bin Hussein is still considered an influential figure in Jordan. He also often criticizes his brother's government, including the handling of the COVID-19 pandemic. As for this, with the knowledge he got from the Harrow School in England, Harvard University in America, and the Royal Military Academy at Sandhurst.

As well as being considered an influential figure, Hamzah bin Hussein is also popular with citizens, ethnic groups, and the opposition King Abdullah II. This popularity has gradually increased along with the many problems in Jordan ranging from ISIS attacks, the influx of refugees from Syria, corruption, and COVID-19. By the leading columnist from Jordan, Ahmad Hasan Al Zoubi, Hamzah bin Hussein feels closer to the people than King Abdullah II.

5. Accused of conspiring with foreign parties

Jordan's Foreign Minister, Ayman Safadi, said Hamzah bin Hussein had threatened national security for conspiring with foreign parties. Safadi did not mention who the foreign group was apart from being an intelligence agency. As for Hussein, said Safadi, intends to use his growing popularity to mobilize citizens and ethnic groups to shake up the reign of King Abdullah II.
Safadi continued, King Abdullah II and his administration had tried to approach Hamzah bin Hussein to confirm this. However, said Safadi, Hussein was not cooperative and forced the authorities to place him under house arrest. In his defense, Hussein claims he has no intention of replacing his older brother.