Australia Is Down Three Million Doses Of Covid Vaccine 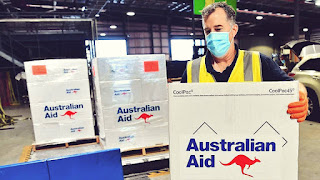 UMMATIMES - Australia on Tuesday said it had not received the more than three million doses of the AstraZeneca Covid-19 vaccine previously promised amid EU export restrictions. This leaves a large gap in initial national inoculation efforts.
Authorities have previously pledged to deliver at least the first 4 million doses of the vaccine by the end of March. However, they were only able to inject 670,000 doses of vaccine after the European Union blocked exports of AstraZeneca's vaccine to Australia because the drug maker failed to fulfill its promise to deliver to the block.
"We are scheduled to receive more than 3 million doses of AstraZeneca vaccine from abroad now, which have not yet arrived in Australia due to the shipping problems we see occurring here and in other parts of the world," said acting Chief Medical Officer Michael Kidd.
Australia started vaccination later than some other countries because of the low number of cases. Australia has just recorded just under 29,400 Covid-19 cases and 909 deaths since the pandemic began. However, the delay in AstraZeneca dosing made it difficult to accelerate the vaccination program.
The majority of Australia's nearly 26 million people are expected to be given the AstraZeneca vaccine, with 50 million doses to be produced locally from the end of March. So far, however, only about 2.5 million doses have been produced locally with thousands of doses having passed testing and being distributed to vaccination sites.
The Australian Pharmaceutical Union, tasked with helping launch a national inoculation program from May, said on Tuesday that slow domestic vaccine approvals and logistical problems would now push deliveries to June.
"We have been told that the delay is related to supply chain delays rather than the ability of the pharmacy network to participate," said Union Pharmaceuticals President Trent Twomey.