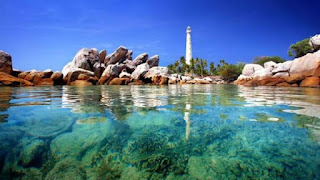 UMMATIMES - The UNESCO Global Geopark Council (UGGC) designated the Belitung Geopark as a Global Geopark at the 211th Session of the UNESCO Executive Council which was held virtually, and chaired from Paris, on April 15, 2021.
At the meeting, together with the Belitung Geopark, there were 7 other nominations recommended by the UGGC to be designated as a new UNESCO Global Geopark, as quoted from a written statement from the Indonesian Ministry of Foreign Affairs, Sunday, April 18, 2021.
The UGGC trial took place on 8-9 December 2020. The corona virus pandemic caused the UGGC to not be able to evaluate all proposed geoparks.
The Belitung Geopark, which is located in the province of Bangka-Belitung, is one of the priorities in the discussion and has received positive recommendations for inclusion in the UNESCO Global Geopark list.
UNESCO recognizes the geological diversity of Belitung Island and the surrounding islands. This diversity includes landscapes, rocks, minerals, geological and tectonic processes, as well as the evolution of the earth in Belitung.
The Belitung Geopark is considered to be unique with its linkages between geological, biological and cultural aspects. The unique geological landscape of Belitung Island is home to a variety of flora and fauna, some of which are only found in Belitung, such as the Hampala fish and Toman fish. This biodiversity is used by the people of Belitung, including the use of herbal plants.
Through the UNESCO Global Geopark Program, Indonesia can utilize the Global Geoparks Network and the Asia Pacific Geoparks Network to share experiences and practices in managing sites by prioritizing aspects of education, science, local community empowerment, and sustainable development.
Belitung Geopark, is the 6th Indonesian national geopark included in the UNESCO Global Geopark list. Previously, there were Toba, Batur, Ciletuh, Gunung Sewu and Rinjani Caldera Geoparks. Indonesia also has many natural and cultural properties that are included in the UNESCO list, including 9 cultural and natural heritage sites and 18 biosphere reserves.