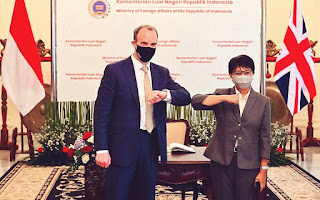 UMMATIMES - British Foreign Minister Dominic Raab appreciated Indonesia's role in the Covid-19 COVAX vaccine distribution facility, which has helped provide equitable and fair access for every country.
Quoting Indonesian Foreign Minister Retno Marsudi, Dominic Raab agreed that only through collaboration and cooperation can the world get through this crisis. "That includes ensuring that there is fair access to vaccines for everyone," said Dominic Raab in Jakarta on Wednesday, April 7, 2021.
"I would also like to take this opportunity to pay special tribute to Minister Retno for his leadership in this matter, as one of the three co-chairs of the COVAX, which is a global mechanism to ensure global access to vaccines, in order to face this terrible pandemic," he said. Raab after attending the Third UK-Indonesia Partnership Forum bilateral forum.
Employees unload an envirotainer containing AstraZeneca's COVID-19 vaccine upon arrival at Bio Farma, Bandung, West Java, Monday, March 8, 2021 A total of 1.1 million doses of AstraZeneca's COVID-19 vaccine are part of the first batch of the global cooperation scheme for vaccines. and immunization (GAVI) COVAX Facility arrives at Bio Farma which will then be processed and distributed in order to accelerate the vaccination target that is evenly distributed throughout the Indonesian population. BETWEEN PHOTOS / Novrian Arbi
Indonesia has received 1.1 million AstraZeneca Covid-19 vaccines through the COVAX scheme, and is one of the first countries to receive the COVAX vaccine.
The UK, said Raab, is the largest donor to COVAX and has donated 1 billion doses of vaccine to COVAX, as well as helped raise US $ 1 billion from other donors.
"We also contributed £ 5 million for ASEAN's health and economic response to COVID-19. And £ 1 million for the ASEAN COVID response action fund," said Raab.
During his prime visit to Indonesia as foreign minister, Dominic Raab also agreed on new British cooperation with Indonesia in the field of security and trade, supporting the creative sector in Indonesia, including infrastructure development and human resources.