Child of US Shooting Victim Dies in Mother's Embrace 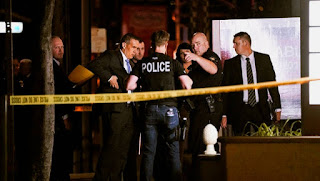 UMMATIMES - A child is the victim of a shooting at an office building in Southern California, United States. The child died in the mother's arms.
Local authorities said the mother was trying to save the child from the shooting incident. The mass shooting, which occurred in Orange, California, about 48 kilometers southeast of Los Angeles, marked the third mass shooting to occur in the United States in less than a month.
"It appears that a boy died in his mother's arms as she tried to save him during this gruesome massacre," Orange County Attorney Todd Spitzer told a news conference.
In two other shootings in March, a man killed eight people including six Asian women at three massage parlors in Atlanta, and another man opened fire on a supermarket in Boulder, Colorado, killing 10.
Unlike the other two shootings, investigators in California were able to determine immediately that the perpetrator knew the victim, not randomly acting out violence.
"The motive was originally believed to be related to the business and personal relationships that existed between the suspect and all the victims," ​​Lt. Jennifer Amat of the Orange Police Department said at a news conference.
Apart from boys, the other fatalities were a man and two women.
"The perpetrator and a woman, who is believed to be the mother of the boy, are now being treated in hospital in a critical but stable condition," said Amat.
On Wednesday (31/2) afternoon local time, the perpetrator, identified as 44-year-old Aminadab Gaxiola Gonzalez, closed the access gate to the building with a bicycle lock which made it difficult for police to enter the location.
"Meanwhile, a terrible tantrum was going on in the office and people were dying or being shot," said Spitzer.
Authorities found a semi-automatic weapon and a backpack filled with pepper spray, handcuffs and ammunition that they believed belonged to the suspect.