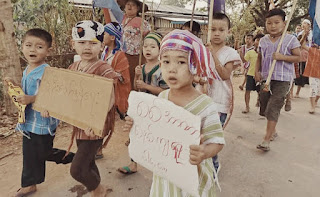 UMMATIMES - Myanmar security forces have reportedly killed 543 civilians, including 44 children, since the wave of demonstrations against the coup on February 1. This figure was released by the Myanmar Political Prisoners Assistance Agency (AAP), Friday (02/04).
In addition to using tear gas and blunt weapons, the police and military are increasingly using live ammunition to injure or kill demonstrators, even in calm situations.
So far, as many as 2,700 demonstrators and democracy activists are in police custody. Violence in Myanmar has escalated in recent weeks, reports the organization Save the Children. The mortality rate for children has notably more than doubled in the last 12 days.
"We are surprised that children are still being targeted by fatal attacks, despite repeated calls to protect children," the agency wrote in a press release.
"What is most gruesome is the reports that some children were killed while they were at home, where they should be safe from crime."
Security forces reportedly carried out night raids on residences of residents suspected of supporting demonstrations or civil disobedience movements, which have recently mushroomed in major Myanmar cities.
The human rights organization, Human Rights Watch, wrote that the military junta used the tactic of "enforced disappearance" and refused to disclose their location or deny access to lawyers.
"The military is increasingly using random arrests or forced demolition to spread fear against the demonstrators," said HRW Asia Director Brad Adams.
"The international community must demand the release of all disappeared citizens and impose economic sanctions on the leaders of the junta."

Thursday (01/04), the UN Security Council adopted a resolution that "expresses deep concern over the rapidly deteriorating situation," and condemns violent acts against peaceful demonstrations.
The initial draft of the UNSC resolution reportedly used sharper language, and contained threats to "take further steps," in the form of sanctions. However, thanks to the Chinese lobby, the words "follow-up" or "murder" were removed from the final text of the resolution, Asia Nikkei reported. a diplomat involved.
Britain chose to impose economic sanctions on its own to disarm the military junta's business unit. London also donated USD 700,000 (IDR 10 billion) to finance a UN program that documents crimes against humanity in Myanmar.
Nevertheless, sanctions and condemnation have so far failed to curb Myanmar's military in the face of mass protests across the country. According to local media, demonstrations again flooded city streets in Myanmar on Friday (02/04).
The junta tried to reduce the circulation of information and communication by cutting off internet connections. As of Thursday (01/04), Myanmar citizens will no longer be able to access the internet "until an undetermined time limit," wrote the Ministry of Transportation and Communication in Naypyidaw.
The government also bans all media, except those belonging to the military. Most of them divert publication content to social media such as Facebook. The social media giant from California has promised to block military access to its platform, in order to ensure the opening of free communication space.