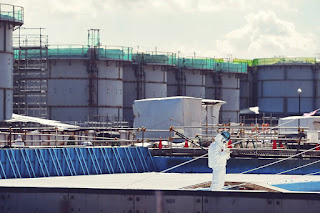 UMMATIMES - The Chinese government expressed its concern through diplomatic channels over the Japanese government's plan to dump radioactive contaminated water from the Fukushima Nuclear Power Plant (NPP) into the Pacific Ocean.
"China urges the Japanese side to take responsibility in handling the issue of careful disposal of nuclear waste," said Chinese Foreign Ministry spokesman Zhao Lijian in Beijing, Monday (12/4).
By considering the Fukushima nuclear accident as one of the most serious accidents in the world, according to Zhao, the radioactive leak has had a major impact on the environment, food safety and human health. He stressed the importance of proper disposal of nuclear waste, because it is linked to the interests of the international community and the main interests of neighboring countries.
"This should be handled appropriately and carefully in order to avoid damage to the marine environment, food safety and human health," he said.
According to him, the world was very concerned about the Japanese plan, which caused conflict. In fact, conflicts also occur within Japan. "The Japanese side must be responsible for the interests of the international community and the interests of its own people," Zhao said in a written statement.