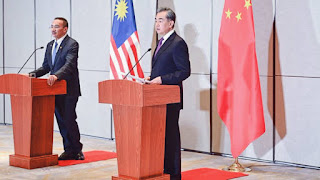 UMMATIMES - The Chinese government has supported the government leaders of the Association of Southeast Asian Nations (ASEAN) to hold a special meeting as soon as possible regarding the unrest in Myanmar. China also hopes that the dialogue process can be held soon.
"Myanmar is a member of the ASEAN family and a close neighbor of China. We all hope that the different parties in Myanmar can initiate dialogue as soon as possible in the long-term interests of the country in overcoming differences in accordance with applicable laws and supporting democratization," said Chinese Foreign Minister Wang. Yi after meeting Malaysian Foreign Minister Hishamuddin Hussein in Nanping City, Fujian Province, Thursday (1/4).
"We all believe the international community will create a favorable climate for Myanmar's domestic political situation in accordance with the principle of non-intervention," he said.
The meeting of the two foreign ministers also discussed the post-epidemic agenda and other issues, such as vaccines and trade. China and Malaysia have also reached a mutual agreement in maintaining peace and stability in the South China Sea. The two countries are both involved in disputes over the South China Sea in addition to Brunei Darussalam, the Philippines, Vietnam and Taiwan.
As reported by Antara Beijing previously, Foreign Minister Wang Yi - who is also a member of the State Council of China - met with four foreign ministers of ASEAN member countries, namely Indonesia, Malaysia, Singapore and the Philippines in Fujian Province on March 31-April 2, 2021. China is scheduled to be held on Friday in Wuyishan City, Fujian Province.