China: military exercises in the Taiwan Strait will continue to be held regularly 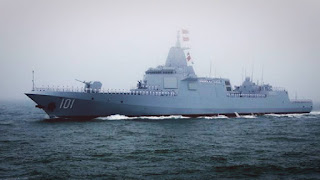 UMMATIMES - The Chinese Navy said that the military exercises currently taking place in the Taiwan Strait would continue to be held regularly.
The remarks came as tensions were rising near the island which Beijing claims as China's sovereign territory.
Taiwan has complained of increased Chinese military activity near the island in recent months as China stepped up efforts to assert sovereignty over the democratically run island.
The Chinese navy said the carrier group, led by Liaoning - China's first actively operated aircraft carrier, was conducting "routine" exercises in waters near Taiwan.
The provocative action is claimed to aim to increase the capability of the Chinese fleet in safeguarding national sovereignty, safety and development interests.
"Similar exercises will be carried out routinely in the future," the navy added, without elaborating.
The Chinese statement came after Taiwan's Defense Ministry reported on a new incursion by the Chinese air force into the island's air defense identification zone on Monday.
Taiwan's Defense Ministry said it had "fully understood" the situation in the air and sea around Taiwan and that it was "dealing appropriately" with the issue.
Meanwhile, the Japanese Ministry of Defense on Sunday (4/4) said that Liaoning, accompanied by five escort ships, had transited through the Miyako Strait en route to the Pacific.
China's Global Times newspaper reported that Nanchang, a powerful new Type 055 destroyer fleet that entered service last year, is part of the Chinese carrier group.
The widely read newspaper was published by the Chinese Communist Party's official media, the People's Daily.
"The combination of the carrier and the large destroyer Type 055 will be the standard configuration of the Chinese carrier task group in the future," said China's Global Times.
The Liaoning and its twin ship, the Shandong, have been used in training or sailing near Taiwan before.
In December 2019, shortly before the elections for leaders and lawmakers in Taiwan, Shandong sailed through the vulnerable Taiwan Strait. It is a move condemned by Taiwan and seen as an attempt at intimidation.
Taiwan is China's most sensitive territorial issue and a potential flashpoint for military friction. China has never abandoned the use of force to bring the island under its control.
Taiwanese leader Tsai Ing-wen is overseeing the island's military overhaul, launching new equipment such as the "carrier killer" stealth corvette.