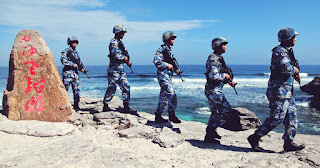 UMMATIMES - The Chinese government has continued its confrontation with Taiwan, which has been reluctant to be recognized as a part of it. Quoted from the Reuters news agency, China will regularly hold joint military exercises in Taiwanese waters as tensions escalate between the two.
"The aim of this military exercise is to improve security guarding capabilities and interests in our sovereign territory. This exercise will be routine in the future," the Chinese Navy claims in its press statement, Tuesday, April 6, 2021.
Previously, Taiwan has repeatedly protested China's steps to hold military exercises in its territorial waters, especially in the Taiwan Strait. According to Taiwan, what China did was a violation of its sovereignty. Therefore, on several occasions, Taiwan responded to the military exercise by sending its fighter jets to expel them.
China has not changed its attitude even though it has repeatedly been expelled by Taiwan. They still repeatedly entered the waters of Taiwan. In fact, China once involved its air force team by flying a bomber plane to Taiwan's aviation area. China feels entitled to hold these actions because they think Taiwan is a part of them.
As for this latest military exercise, China said it would involve its carriers, Liaoning and Nanchang. Nanchang has been named by Chinese media Global Times as one of their best defense equipment and is part of the 055 Destroyer type.
"The combination of the aircraft carrier and the Type 055 Destroyter will be the standard configuration for the Chinese carrier in the future," the Chinese Navy added.
The Ministry of Defense of Taiwan claims to have received news about the Chinese Navy's statement and to understand the situation. However, they guaranteed that the situation for Taiwan and China would remain under control. Moreover, currently, the development of a new equipment known as "carrier killer" is underway.