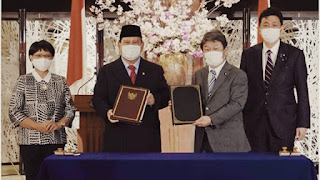 UMMATIMES - The intimacy between Indonesia and Japan in both the Ministry of Foreign Affairs and Ministry of Defense with the meeting and joint agreement between the two countries March 30, 2021, made China launch strong protests.
"We express very serious concerns about the series of negative actions recently carried out by Japan against China," said Hua Chunying, a spokesman for the Chinese Ministry of Foreign Affairs, Thursday (1/4/2021) broadcast on TBS TV.
China accuses Japan of "spreading discord" over Beijing's maritime activities. The Chinese criticism followed a two-plus-two dialogue between the diplomatic heads of defense of Japan and Indonesia which was witnessed by the Indonesian and Japanese Foreign Ministers.
The 2 + 2 meeting was a success between the Japanese and Indonesian ministers. The Japanese Prime Minister Yoshihide Suga even received the two Indonesian ministers on March 30 at 10:40 am at the Japanese PM's official residence.
This is a rare thing for the Indonesian Minister to be officially accepted in the place of the Japanese PM. Generally only the head of government.
The first written defense technology transfer agreement was made by Japan to Indonesia, which was jointly signed on March 30 in Tokyo between Defense Minister Prabowo Subianto and Foreign Minister Retno Marsudi with the Japanese Defense Minister and the Japanese Foreign Minister.
"Just let China be like that. That's his right. The important thing is that the relationship between Indonesia and Japan is getting more intimate now and that is very beneficial for all of us, especially with ASEAN which is also getting closer to Japan," said a Japanese government official, Friday (2/4) / 2021)