China Vaccines Residents of One City at the Border 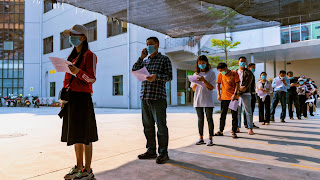 UMMATIMES - The Chinese border city, Ruili, will vaccinate its entire population of 300 thousand people, Friday (2/4). The areas hit by the new Covid-19 outbreak will carry out the program for five days.
China's state channel CCTV showed people lining up and getting vaccinated in a city with 16 cases confirmed since Tuesday. A total of 12 of them are Chinese and four others are citizens of Myanmar.
A Communist Party official in Ruili said that 159 thousand doses of the vaccine had arrived in the city. This is the first time China has tried to vaccinate entire cities in response to a new outbreak. This step was taken when the government increased the national vaccination program.
Television footage showed empty streets as officials ordered people to quarantine homes and close non-essential businesses. The city also said it would tighten surveillance around the border to try to stop anyone crossing illegally from Myanmar.
China has largely eradicated the local transmission of Covid-19. The country is quick to take strict measures whenever new clusters emerge.