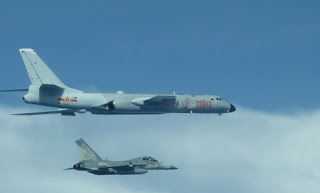 UMMATIMES - The Taiwanese government reported that 25 Chinese air force aircraft entered the territory of the country's air defense identification zone (ADIZ) and flew in the area near the Pratas Islands on Monday (12/4). The aircraft reportedly include fighter jets and nuclear-capable bombers. The Taiwanese government said it was the biggest attack carried out by the Chinese air force so far.
Reports of 'attacks; It comes just moments after the United States Department of State (US) issued guidelines that would allow state officials to communicate and meet more freely with Taiwan. This is a step that is considered aimed at deepening relations with Taipei.
In recent months, Taiwan reported that repeated Chinese air force missions were taking place. In particular this activity took place in the southwest region of Taiwan's air defense zone, near the Pratas Islands.
In China's most recent so-called strike by Taiwan, there were 14 J-16 and four J-10 fighters, as well as four H-6K bombers, which can carry nuclear weapons, two anti-submarine aircraft and one early warning aircraft. This is the biggest attack since Beijing's air force activity on ADIZ Taiwan began to be reported last year.
Taiwan's Defense Ministry said the country responded by sending warplanes to intercept and alert Chinese planes. Apart from that, a missile system is also deployed to monitor the mission.
The aircraft belonging to the Chinese air force all fly in the area close to the Pratas Islands. In the past, the Land of the Bamboo Curtain has described such missions as protecting national sovereignty and dealing with what is believed to be "collusion" between Taipei and Washington.
Like most countries in the world, the US does not have formal diplomatic relations with Taiwan. However, Foreign Minister Antony Blinken recently said that his country was concerned about China's aggressive actions against Taiwan and warned that it would be a serious mistake for anyone trying to change the island nation's status quo by force.
China describes Taiwan as part of its most sensitive territorial territory and a red line that the US should not cross. The government of this country has also never abandoned the possibility of using force aimed at reuniting the two countries as one.