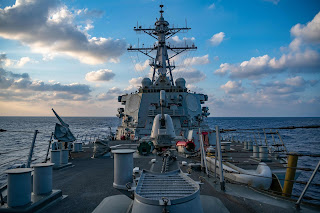 UMMATIMES - Military activity in the South China Sea surged over the weekend. Chinese aircraft carriers entered the region and the US Navy expeditionary group is also completing the training process.
China's state-run newspaper Global Times said the country's first aircraft carrier, Liaoning, sailed into the South China Sea on Saturday. The presence of the flotilla after completing a week of naval exercises around Taiwan.
Liaoning's reported arrival in the South China Sea came after a US Navy expeditionary group conducted drills in the South China Sea the day before. This US military carries the aircraft carrier USS Theodore Roosevelt and the amphibious assault ship USS Makin Island, plus two flat-top warships joined by a smaller cruiser, destroyer, and amphibious ship.
The ships also carry hundreds of Marine ground troops from the 15th Marine Expeditionary Unit as well as support helicopters and F-35 fighter jets. "The force of this expeditionary strike fully demonstrates that we maintain a trustworthy fighting force capable of responding to all possibilities, deterring aggression, and providing regional security and stability in support of a free and open Indo-Pacific," said US Navy Captain Stewart Bateshansky. .
The Global Times quoted Chinese military expert Wei Dongxu as saying that the US Navy exercise was a provocation. He said exercises by Chinese aircraft carriers could establish a broader maritime defense position, guard China's coastal areas and safeguard US military activity.
Meanwhile, quoted from CNN, the US and the Philippines are preparing for joint exercises. The plan comes after US Defense Secretary Lloyd Austin proposed ways to deepen military cooperation between Washington and Manila after Beijing deployed ships in disputed waters.
The proposal includes ways to raise situational awareness of the threats in the South China Sea. This push comes after recent Chinese maritime militia ships on Whitsun Reef or in the Philippines' exclusive economic zone in the Spratly Islands.
The head of the Philippine military, Lt. Gen. Cirilito Sobejana, of more than 1,700 US and Philippine troops began military exercises for two weeks from Monday (12/4). The exercise will focus on testing the readiness of US and Philippine forces to respond to events such as extremist attacks and natural disasters.
Washington and Manila are bound by a mutual defense agreement. Officials say it could apply if there is a Chinese military action against a Philippine government vessel in the vicinity of Whitsun Reef.
China claims nearly all of the 1.3 million square miles of the South China Sea as its sovereign territory. The claim sparked a dispute between Chian and other countries in the Southeast Asia region. In recent years, Beijing has turned a disputed feature in the region into an artificial island, complete with military fortifications.
Beijing accuses Washington and other foreign navies of fueling tensions in the region. The US sent warships like the current expeditionary group led by the aircraft carrier Roosevelt.