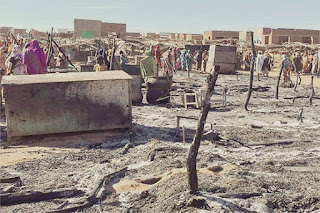 UMMATIMES - The Sudanese government declared a state of emergency in West Darfur after at least 40 people were killed and 58 injured in three-day clashes between tribes in the state capital, El Geneina. This was reported by the United Nations.
The incident is the latest in violence that has resurfaced in Darfur since a peace agreement was signed in late 2020 and UN peacekeeping forces withdrew from the region. In January, at least 129 people were killed and 108,000 were still displaced after similar clashes broke out in El Geneina between members of the Masalit and Arab tribes.
Military reinforcements, which used to be deployed to the city, have been largely withdrawn, residents told Reuters. In a statement issued on Monday, Sudan's security and defense committee said it had authorized troops to control the situation and continue the forced disarmament movement in the region.
According to residents of El Geneina as well as the UN's internal security bulletin, seen by Reuters, there was use of heavy weaponry and rocket propelled grenades there. Pictures and videos taken by a number of residents showed plumes of smoke in several residential areas of the city.
"The city is full of armed criminals and we don't see a real military presence to be able to protect civilians," said one resident.