Declaration of 103 Former Turkish Navy Officers Call for a Coup 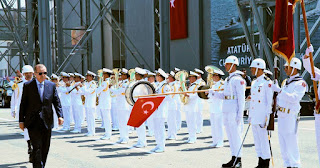 UMMATIMES - A group of retired Turkish Navy (AL) admirals came under fire on Sunday for raising questions that government officials were linked to the history of military coups in Turkey.
A total of 103 former navy officers criticized Turkey for withdrawing from international treaties regulating shipping via the Bosporus and Dardanelles Strait, which connects the Mediterranean Sea to the Black Sea. The statement issued was said to be an attempt to incite the public to stage a coup against the official government.
The chief prosecutor in Ankara launched an investigation into the admiral's statement. "The statements by a group of retired military members who caused the coup period only made them look ridiculous and sad," Erdogan's spokesman Ibrahim Kalin said on his Twitter account.
Turkish Vice President Fuat Oktay compared the signatories to the statement to "cowards whistling at the graves". Numan Kurtulus, deputy leader of Turkey's ruling party, posted a status on his Twitter account, saying they were "lovers of ancient Turkey who see themselves above the will of the nation."
English Alarabiya reports that it is possible for Turkey to abandon the 1936 Montreux Convention. The decision came last week during discussions about building a shipping canal north of Istanbul through the Bosporus.
"The fact that withdrawal from the Montreux Convention is open to debate as part of talks on the Istanbul Canal and the authority to exit the international agreement is met with concern," said the statement read out by the retired admiral in a declaration released Saturday evening.
"We believe that all kinds of statements and actions which will lead to discussion of the Montreux Convention, which has an important place in Turkey's survival, should be avoided," the group said.
The ruling party and government officials have something in common with statements that have accompanied past military takeovers of Turkey. Turkey experienced coups in 1960, 1971 and 1980, and military intervention in 1997, which led to the resignation of the Islamic-led coalition government.
In 2016, the failed coup of some military factions against Recep Tayyib Erdogan left more than 250 people dead.