Donald Trump's Wealth Ranking Plunges From 339th Position To 1,299 According To Forbes List 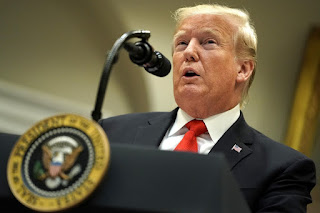 UMMATIMES - Former US President Donald Trump's billionaire ranking has fallen from 339 in 2020 to the 1000's this year.
Reported by The Guardian, the title of the richest person in the world still bears the boss of Amazon, Jeff Bezos with a fortune of 177 billion US dollars.
This year is the fourth time Bezos has sat in first place in the world billionaire ranking. Meanwhile, Tesla owner Elon Musk rose to second place with a fortune of 151 billion US dollars, an increase of 126 billion dollars from last year.
This year the wealth of billionaires increased by 5 trillion US dollars with a total of 13.1 trillion US dollars combined, an increase of 8 trillion US dollars from last year. The list of the richest people according to Forbes also broke a record in 2021, where 493 new names entered the sequence.
There is at least one new billionaire on the list every 17 hours. A total of 205 of them came from China. The US still has the most billionaires at 724, followed by China including Hong Kong and Macau at 698.
Behind the success of several parties, there are also those who have even lowered their wealth rankings, as experienced by Donald Trump.
This year, Trump has fallen from his 300s in 2020 to 1299. "I took a lot of finance courses at Wharton. First, they teach you all the rules and regulations. Then they teach you that those rules and regulations are really meant to be broken," Trump quoted Trump as saying on his Forbes profile.
Trump has lost millions of dollars from his retail, hotel and golf resort giant in recent years. Even so, Trump's business, which had fallen because of the incident in the US Capitol, is still running and helping the former president to earn millions of dollars.
According to Forbes records, Trump has a net worth of $ 2.4 billion. He is in the 339th position and was included in the list of the 400 richest people in the world in 2020.
Forbes noted that Donald Trump is the only billionaire president in American history. Then celebrity and young cosmetics entrepreneur, Kylie Jenner was removed from the Forbes list.
Kylie's name disappeared after it was revealed that she was increasing her sales figures to make it to the billionaire list in 2020. On the other hand, his older sister Kim Kardashian is even on this year's list.
Forbes estimates Kardashian West now has $ 1 billion in wealth, up from $ 780 million in October, thanks to its two businesses, KKW Beauty and Skims. "I feel that success is the best revenge," quoted Kim, who has officially held conglomerate status.
Kim's ex-husband, Kanye West still survives with a fortune of 1.8 billion US dollars. Sixty-one billionaires dropped off this year's list, the smallest number in a decade.
Among them is Isabel dos Santos, who was once the richest woman in Africa but fell due to corruption charges. Eighty-six percent of the Forbes list experienced an increase in wealth amid the Covid-19 pandemic. About 250 people who were not previously on the list rejoined this year.
"The very, very rich get very, very rich," said Forbes head of content, Randall Lane, in an interview with Reuters Video News.
On the other hand, the pandemic looks set to increase the number of people living in extreme poverty to 150 million this year.