Dutch PM Mark Rutte; Got caught in a motion of disbelief 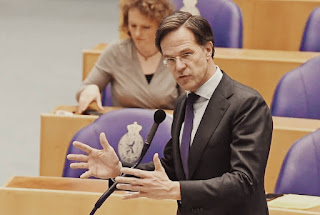 UMMATIMES - Dutch interim Prime Minister Mark Rutte retained his leadership on Thursday (01/04) after records of the formation of a new coalition government contradicted his statements to the press.
Rutte narrowly escaped accusations of a no-confidence vote in parliament after opposition party leaders accused him of lying and urged him to resign.
The center-right People's Party for Freedom and Democracy (VVD) secured more parliamentary seats in elections than any other party and placed them in key positions to lead the new coalition government.

The beginning of the crisis

The process of forming Rutte's fourth coalition has stalled since two officials who led the talks tested positive for COVID-19. Photojournalists captured one of the two officials, Kajsa Ollongren of the centric party D66, as he rushed out of parliament following the release of the results of the coronavirus tests. Ollongren appeared holding a document containing notes on coalition talks.
The document says "Omtzigt's position. Position elsewhere," referring to MP Pieter Omtzigt of the Christian Democratic Appeal Party (CDA). The information meant that the negotiating team of negotiators gave Omtzigt a job.
The discussion attracted public attention, because Omtzigt was a leading critic of Rutte's previous cabinet.

What did Rutte say?

Last week, Rutte told reporters he had not yet discussed Omtzigt in coalition negotiations. However, many notes published on Thursday (01/04) confirm that Rutte was actually talking about CDA MPs.
During the ensuing debate on Thursday (01/04), Rutte admitted that he did not remember part of the coalition talks and answered journalists' questions "with a good conscience." "I'm not standing here (to) lie. I'm telling the truth," said Rutte.
Rutte added that he only remembered when he received a call on Thursday (01/04) morning about the conversation. Rutte declined to give a source.
The prime minister insisted that "elsewhere" meant he suggested Omtzigt move to the ministerial position.

How have members of parliament responded?

Geert Wilders of the far-right Nationalist Freedom Party (PVV) slammed Rutte's leadership and called a vote of no-confidence. "Don't you realize your time is up?" Wilders said. "Look for work elsewhere yourself."
Sigrid Kaag of the D66 Party said she had seen Rutte's "pattern of forgetfulness, amnesia". "How do you, in the greatest crisis we face in the Netherlands, restore the trust that has been broken again?" Kaag asks.
Omtzigt, who was sworn in as a member of parliament on Wednesday (31/03) did not attend Thursday's debate (01/04). Earlier he said the dismissal from parliament was "an insult to Dutch voters," the Reuters news agency quoted him as saying.
The CDA, Omtzigt's party, will decide whether to back Rutte or not after they hear Ollongren's explanation of his "position elsewhere" record, according to Dutch public broadcaster NOS.

What's next for Rutte?

"I have led this country through an economic crisis, a refugee crisis, and now a health crisis, a pandemic," Rutte said in parliament pleading for confidence.
"I want to continue with that and form a new coalition with other parties to run this country. And I hope to get enough confidence in that."
Wilders, whose party recently lost seats, is calling for new elections. Nicknamed "Teflon Mark", Rutte survived scandals and no-confidence motions in the past.