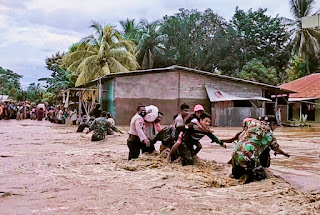 UMMATIMES - Chinese President Xi Jinping expressed his condolences to the victims of the natural disasters in East Nusa Tenggara.
The number 1 person in the most populous country in the world sent a message of condolences to the victims of the disaster in East Nusa Tenggara through Indonesian President Joko Widodo, Tuesday.
In his message, Xi Jinping said he was shocked by the natural disaster in East Nusa Tenggara which caused casualties.
On behalf of the government and the Chinese people as well as himself, Xi expressed deep condolences and sympathy for the victims and their families.
Tropical cyclone Seroja caused floods, landslides and strong winds in East Nusa Tenggara on Sunday (4/4).
As of Tuesday afternoon, the natural disaster had resulted in 86 people dead, 98 people missing and 146 others injured, according to data from the National Disaster Management Agency (BNPB).
The disaster also affected 2,683 residents scattered in Kupang, East Flores, Malacca, Lembata, Ngada, Alor, East Sumba, Sabu Raijua, Rote Ndao, Timor Tengah Selatan, and Ende.