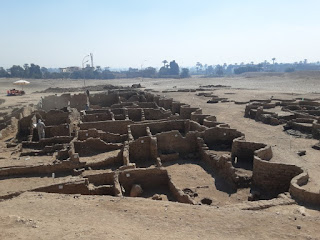 UMMATIMES - Egyptian archaeologists find a lost city. The city was built during the reign of Amenhotep III, the ninth pharaoh of the 18th Dynasty.
The city buried under the sand near the Valley of the Kings in Luxor is 3,000 years old. But the findings say that a large number of tools in the city walls that were excavated are still very well preserved.
The team, led by prominent archaeologist Dr Zahi Hawass, is digging to find the mortuary of the Tutankhamun temple near Luxor. Previously they had found a mud brick building stretching out in all directions.
"We started our work looking for Tutankhamun's mortuary temple because the Horemheb and Ay temples were found in this area," said Dr Hawass, quoted by The National News, Friday (9/4).
Inside the city buildings, some of them three meters high, were jewelery, beetle, and pottery utensils. Egyptologists have already praised the importance of the find, with some likening it to the discovery of Pompeii, another ancient city that contains a large number of intact artifacts.
"The discovery of this lost city is the second most important archaeological discovery since Tutankhamun's tomb," said Dr. Betsy Brian, professor of Egyptology at Johns Hopkins University in Baltimore.
"The discovery of the lost city will not only give us a rare glimpse into the life of the Ancient Egyptians at a time when the Empire was at its richest, but will help us explain one of the greatest mysteries in history: why did Akhenaten and Nefertiti decide to move to Amarna?" .
The mission has been at the site for the past seven months and has since excavated large parts of the city. The border extends to nearby Deir El Medina, an ancient Egyptian village that was home to craftsmen who worked on tombs in the Valley of the Kings during the 18th to 20th dynasties.
Dr Hawass said he was proud of the mission. "Many representatives from abroad are looking for this city and never find it," he said.
The city, Hawass said, was the largest administrative and industrial 18th dynasty settlement on Luxor's west bank. It is so close to some of Luxor's most famous ancient Egyptian monuments, that it is confusing because it had not been excavated earlier.
It sits between the temple of Ramesses III at Medinet Habu and the temple of Amenhotep III in Memnon, two of the most popular ancient Egyptian heritage sites in the area.
The remains of a bakery and a food preparation area, complete with ovens and earthenware, were found in the city. Also found were a number of kilns believed to be used for making faience and other decorative items.
"The archaeological layer has been untouched for thousands of years, left by ancient inhabitants as if it were yesterday," said Dr Hawass.