Erdogan Throws the Idea of ​​Establishing a Global Islamic Megabank 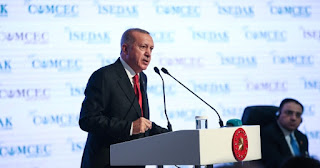 UMMATIMES - The Turkish president on Thursday (8/4) promoted the idea of ​​an Islamic megabank, which can meet the liquidity requirements of Islamic financial institutions globally as well as financing for infrastructure projects.
Following the D-8 Group of Developing Countries Summit via video conference, President Recep Tayyip Erdogan also reiterated his urge to expand international trade using local currencies.
Since Turkey first called for trade with local currencies at the D-8 summit in Istanbul in 2017, developments over the past four years prove that the idea is credible and plausible, Erdogan stressed.
"To protect our country from foreign currency risk, we must focus on trading using local currencies," he said.
Regarding the D-8 Network for Research and Innovation, Erdogan said the network was very important, because it allows sharing of information between universities and other institutions in fields such as renewable energy, artificial intelligence (AI), robotics, internet, blockchain and nanotechnology.
He stressed that D-8 countries must concentrate on high value-added, high technology-based production for strong and sustainable growth. Erdogan also stressed that D-8 members must renew themselves to better suit current needs and turn them into results-oriented projects and structures.