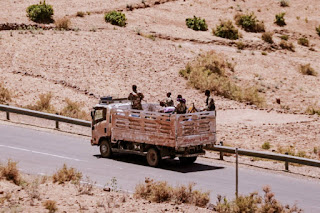 UMMATIMES - The Ethiopian Foreign Ministry said Eritrean troops were starting to withdraw from the Tigray region. There has previously been an increase in reports of human rights violations including rape, looting and killing of civilians by Eritrean forces.
"The Eritrean troops have crossed the border and the Ethiopian National Defense Forces have taken over guarding the national border," said a statement from the Ethiopian Ministry of Foreign Affairs.
On Friday (2/4), the United States, Germany, France and other G7 nations called for a swift, unconditional and verifiable withdrawal of Eritrean troops. For months, Eritrea and Ethiopia denied the presence of Eritrean troops despite dozens of eye witnesses.
Ethiopian Prime Minister Abiy Ahmed acknowledged the presence of Eritrean troops on Tigray. But Eritrea still does not acknowledge that its troops are in Ethiopia and refuses to take responsibility for violations in the region.
Abiy said his troops had been carrying out massive operations over the past three days, against enemies in the western and northern regions. He did not specify Tigray but his territory was to the north.
Ethiopia sent troops to Tigray in November to fight the TPLF, then the regional ruling party, which had attacked military bases in the region. In late November, the Tigray People's Liberation Front (TPLF) withdrew from the regional capital Mekelle and the Ethiopian government declared victory.
Electricity and telephone lines to Tigray have been cut off over the past four days, making it difficult to verify a withdrawal from Eritrea. Reuters reporters in Tigray last month saw Eritrean troops in major cities and main roads.
The United Nations Office for the Coordination of Humanitarian Affairs (OCHA) said "clashes and ambushes were reported in large parts of the region". Last month, an aid organization also witnessed ambushes of a military convoy and extrajudicial executions of civilians on a main road. The Foreign Ministry said full access to the region had now been granted to humanitarian organizations.
"In some parts of South and Southeast Tigray, for example, access has been restricted for more than a month and the road from Alamata to Mekelle remains closed, blocking humanitarian operations in the area," said an OCHA statement.
The Foreign Ministry said a joint investigation with external experts into alleged human rights violations would begin soon. The ministry urged donors to send more food and medical assistance.
The origin of the conflict occurred when Abiy came to power in 2018. He undertook democratic reforms and negotiations to end the conflict with Eritrea. But he disbanded the Ethiopian People's Revolutionary Democratic Front (EPRDF) which has been in power for nearly 30 years.
The EPRDF is a coalition of parties based on ethnicity. TPLF dominates the coalition and gathers strength as an ethnic minority. Tigray's population is only 6 percent of the total population in Ethiopia.