Ferry collided with cargo ship in Bangladesh, 26 people died and others missing 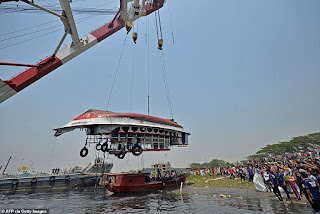 UMMATIMES - Dozens of people died after a ferry collided with a cargo ship in Bangladesh, the Mirror reported. The ferry carrying 50 passengers collided with a cargo ship and sank on Sunday (4/4/2021). At least 26 people were killed and several passengers still missing, officials said. 21 bodies were found as of Monday. The ferry sank after departing from the Narayanganj industrial district, about 12 miles from Dhaka bound for Munshiganj, said Narayanganj district administrator Mustain Billah. 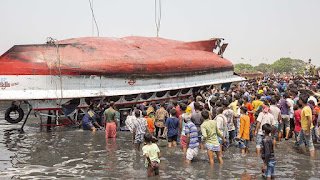 "Most of the bodies were found in the sinking ship after being dragged to the riverbank," he said, adding that some may still be missing. Police and officers said some of the passengers managed to swim ashore. Grieving relatives gathered by the river in search of their loved ones after the tragedy. Rescuers, including divers from the fire department, were looking for victims on Monday.
Rescue operations were briefly hampered by a storm late on Sunday. Reportedly, the ship was full of people rushing to leave the city after the government announced a week-long national lockdown starting Monday to contain a spike in coronavirus cases, according to the Reuters news agency.
Bangladesh reported a record daily spike of 7,087 infections on Sunday, bringing the total number of cases to 637,364 with 9,266 deaths.

Hundreds of people die each year in ferry accidents in Bangladesh, a low-lying country with extensive inland waterways but lax safety standards.
Last June, another passenger ferry capsized after a collision with another boat on the Buriganga river, near Dhaka. At least 32 people died when Morning Bird capsized with 50 passengers on board. Children were among those who lost their lives in the tragedy.
Reports say that overturning of ferries is common in the area due to overcrowding and poor safety standards at shipyards that cause ships to sink in bad weather conditions.