Food Demand in Britain Soars During the Pandemic 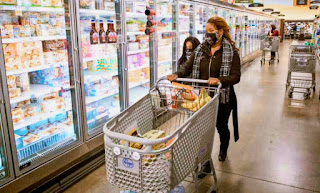 UMMATIMES - More and more people in the UK are suffering from high food prices, and even families with a source of income now have to rely on charities for food aid.
In statistics released in December 2019, fact-checking agency FullFact said that there are currently more food banks in the UK than McDonald's fast food chain outlets.
"It's true that there are now more food banks in the UK than McDonald's," Liam Evans of turn2us food aid told DW. According to him, throughout the UK there are at least 2,000 food banks, while McDonald's outlets have only about 1,300 branches.

More recipients of donors after the pandemic

The food donation charity, Sustain UK, says that 8.4 million people in the UK live in food poverty, and the amount of this aid has increased sharply during the pandemic. Meanwhile The Trussell Trust, the UK's largest food bank chain, in the first half of 2020 distributed nearly 50% more food packages compared to the same period the previous year.
The Kelloggäs-funded YouGov poll surveyed 1,100 primary and secondary school teachers from across the UK in February. The survey also found that one in five schools in the UK have set up a food bank since the start of the pandemic to support families in the neighborhood where the school is located.
According to the think tank Food Foundation, food insecurity has increased among poor families and school-age children during the pandemic. About 40% of families with children who have been getting free meals at school have experienced food insecurity in the last six months.

Impact of budget savings and pandemics

Due to the increasing demand, food banks are now even run by institutions that usually provide community services in other fields.
"As a manager in a lively community center at Hove, my role is typically to provide and manage facilities for about 60 groups weekly, providing opportunities for social interaction, education and recreation," Jonathan Burrell told DW.
He further said that with the lockdown restrictions, "our community center had the opportunity to take on a different role and provide a weekly food bank. After noticing that there was no food bank in our area, we obtained a grant from the local council and started this project."
Burrell said the response from the local community was `` truly extraordinary. "About 80 to 100 people come each week to collect much-needed food supplies, much more than we expected."
"The increase in the number of food banks over the last few years is symptomatic of decades of austerity, benefit freezes and cuts in social programs, as well as long-term problems such as house prices, low wages and rising costs of living," said Evans of Turn2us.
"Hopefully after tackling COVID, the government will shift its focus to an acceleration agenda which should in turn focus on living standards for those with low incomes," said Evans.

Needed, but not easy to admit

Regarding the food aid service, Burrell emphasized that: "What is most surprising is that many of them need to be encouraged to use food bank services for the first time in their lives, including some who previously held high-paying jobs."
Examples are taxi drivers, yoga teachers, and dental cleaners, all of whom have seen a decline in income over the past year.
"We are also concerned about the number of families with young children who need our services. About 60 of those who come each week are family units, often with very young children and feeling hopeless," said Burrell, adding that many people claim they are taking those food supplies for friends or relatives, but obviously for oneself.
"Obviously, many of our clients find it difficult to admit that they need help from a food bank," said Burrell.