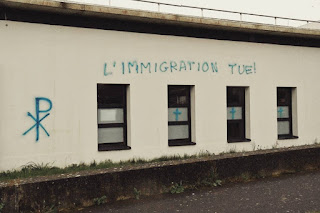 UMMATIMES - The French Interior Minister asked Muslim places of worship to be guarded after a mosque wall was painted one day before Ramadan. On Sunday (11/4), mosque guards and western Muslim residents of the city of Rennes found graffiti on the walls of mosques and Islamic cultural centers in their city.
The graffiti is inscribed with insulting words against Islam and the Prophet Muhammad. The writings also invoked the Crusades and made Catholicism the official state religion. The Rennes City Procuratorate's Office launched an investigation.
During his visit to the scene of the incident, French Interior Minister Gerald Darmanin condemned the vandalism. He also expressed his 'solidarity' with the 5.7 million French Muslims.
"Anti-Muslim writing written in this cultural and cultural center is unacceptable, freedom of worship in France is a fundamental freedom," he said as quoted by Aljazirah Monday (12/4).
He said he had asked the police and regional security forces called the gendarmerie to "broaden surveillance around Muslim places of worship, at the start of Ramadan". The year of Ramadan falls on April 13.
However, there are still concerns about the safety of French Muslims during this holy month. Mainly because of the high rate of Islamophobia recently. Last Tuesday (6/4) night, the door of the mosque in the western city of Nantes was engulfed in flames.
On Friday (9/4) a 24-year-old neo-Nazi member was charged with threatening a mosque in Le Mans in western France. The President of the National Observatory Against Islamophobia Abdallah Zekir criticized this anti-Muslim climate.
"Unfortunately the statements of certain politicians have only made matters worse," he said.