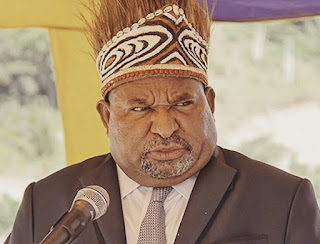 UMMATIMES - Head of the Immigration Division of the Papua Regional Office of the Ministry of Law and Human Rights, Novianto Sulastono, admitted that Papua New Guinea had deported Papua Governor Lukas Enembe and two assistants who entered PNG illegally (without documents). The Indonesian Consulate in Vanimo also issued a passport-like replacement letter (SPLP)
"It is true that the Governor of Enembe and his two assistants were deported, so the Indonesian Consulate in Vanimo issued a passport-like replacement letter (SPLP). Three SPLPs were issued by the Indonesian Consulate in Vanimo, Friday (2/4) respectively on behalf of Lukas Enembe, Hendrik Abidondifu and Ely Wenda, "said Sulastono who was accompanied by the Jayapura Head of Immigration Office Agus Makabori in Skouw.
He admits that the case of Governor Enembe's entry to Vanimo is currently being investigated by the Jayapura Kanim. "The Jayapura Immigration Office is still investigating the case," said Sulastono, adding that Jayapura Immigration had currently detained SPLP Governor Lukas Enembe along with two of his companions.
Papua Governor Lukas Enembe previously admitted entering Papua New Guinea via a footpath using an ojek with the aim of getting treatment and doing therapy. "I know what was wrong because I crossed and entered the PNG area by using a motorcycle taxi," said Enembe after examining the antigen test for use. find out whether exposed to Covid-19 or not.
He admitted that he went to Vanimo, Wednesday (31/3) to get treatment for his illness. The return of Papua Governor Lukas Enembe from Vanimo, PNG, accompanied by the Indonesian Consul in Vanimo Allen Simarmata, when he arrived in the neutral zone, the Consul General Papua New Guinea Geoffrey. L. Wiri, and the Head of the Papua Provincial Border Affairs and Foreign Cooperation Agency Suzana Wanggai.