History of the Easter Rebellion in Ireland 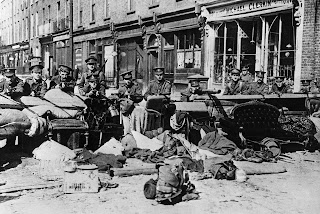 UMMATIMES - One of the historic events in England and Ireland is the Easter Rising. The main reason was that the Irish wanted independence from British rule. The Easter Uprising took place on April 24, 1916 to coincide with Easter Day in the city of Dublin, Ireland.
British troops used artillery weapons, bombs and heavy machine guns against the Irish rebels. With these weapons, they also brutally shot civilians. According to historian Fearghal McGarry, the rebels tried to avoid bloodshed.
Likewise, another historian, Desmond Ryan stated that members of the Irish Volunteers were told not to "open fire unless ordered or intended to evade an attack." The first victim to die was a 19-year-old Irish medical team named Margaret Keogh. He was shot by British troops while treating wounded rebels.
During the rebellion, many people were arrested and executed. The death sentences continued for a week, and 15 people ended up before British firing squad. In the most famous case, the British took the badly injured rebel, James Connolly, from a hospital bed, tied him to a chair at Kilmainham Prison, and was executed by firing squad.
The atrocities of the British army eventually sparked the anger and rebellion of the Irish population, including those who had previously opposed the rebellion.
On April 24, 1916, lines of Irish rebels in military uniforms gathered and marched in Dublin to occupy public buildings, one of which was the post office.
When the uprising broke out, Salah activist and leader of the Easter rebellion, Patrick Pearse, stood in front of the post office and read the proclamation of Irish independence.
"We declare the Irish people's right to ownership of Ireland and self-determination, which is sovereign and inviolable. Long-standing deprivation of rights by foreigners / governments does not extinguish the rights of the Irish people, and cannot be extinguished except by destruction of the Irish people .. "read the proclamation.
Then suddenly 20 thousand British soldiers arrived. Due to their lack of strategy and disproportionate number of members, the rebel group lost and surrendered. Pearse surrendered unconditionally on April 29, 1916. After he surrendered, martial law was imposed throughout Ireland.
The day after surrendering, activists from the Sinn Fein Party were arrested. They are considered to be the masterminds of the rebellion. Not only from Sinn Feinn, whoever they were thought to have participated in the rebellion were captured and executed.
About 3,500 people were detained by the British government as a result of the rebellion. According to records of the Irish charity Glasnevin Trust, around 485 people died in the Easter Uprising. Approximately 260 of them are civilians, 133 British military and police, and the remaining 82 Irish rebels. More than 2,600 people were injured.
The Irish army then guerrilla against the British government. A new truce was agreed in July 1921. Quoting History, a few months after that the two parties signed an agreement to form the free state Irish.
Six northern states of Ireland opted out of the Free State and joined Britain. The Republic of Ireland was proclaimed on Easter Monday, April 18, 1949. The territory consists of 26 counties in the south and west of the island.