How Harmful is India's Covid-19 Variant? 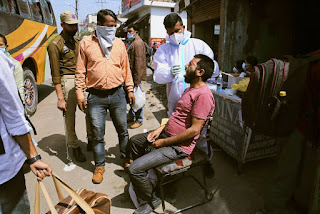 UMMATIMES - In late March, India's National Center for Disease Control (NCDC), a division of the Ministry of Health and Family Welfare, announced that a new “dual mutant” variant had been identified. Where, saliva samples were taken from people in Maharashtra, Delhi and Punjab.
This comes after months of a surge in Covid-19 cases across India, with many countries reimposing curfews, restrictions and lockdown measures.
The Ministry of Health and Family Welfare said that the new "dual mutant" variant had not been found in sufficient numbers to explain the increase in Covif-19 cases across the country. It is thought that this was due to large public gatherings such as weddings, the opening of a cinema and fitness center, as well as the massive political demonstrations in West Bengal where elections will be held soon.
However, it is a variant of concern (VOC) and is being closely monitored. Genome sequencing carried out by a consortium of 10 laboratories in India, called the Indian SARS-CoV-2 Consortium for Genomics (INSACOG), has identified two important mutations in the new variant, giving it the unfortunate title of "multiple mutants".
First, the E484Q mutation, which is similar to the E484K mutation identified in the Brazilian and South African variants, can alter the protein portion of the Corona virus spike. These spike proteins form part of the outer layer of the Corona virus and this is what the virus uses to make contact with human cells, bind to them, then enter and infect them.
Vaccines that have been designed make antibodies that specifically target the viral protein spike. The concern is that if the mutation changes the shape of the spike protein significantly, the antibodies may not be able to effectively recognize and neutralize the virus. Scientists are investigating whether this might be a case of the E484Q mutation.
The second is the L452R mutation, which is also found in a variant thought to be responsible for the outbreak in California. Scientists believe this mutation increases the ability of the spike protein to bind to human host cells, thereby increasing their infectivity. The study also suggested this mutation could help the virus avoid the neutralizing antibodies that vaccines and previous infections could produce, although this is still being investigated.
The combination of these two mutations would indeed make this variant a concern if it became the dominant variant throughout India.