Indonesia Invites D-8 Countries to Focus on the Halal Industry 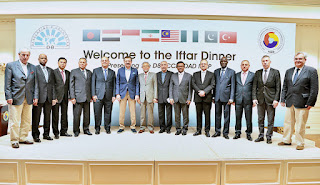 UMMATIMES - Deputy Minister of Foreign Affairs Mahendra Siregar suggested that eight developing countries with a majority Muslim population or D-8 focus on the halal industry and sharia finance in order to encourage economic recovery
"As a platform for the leading countries in the Muslim world, we have a comparative advantage in the halal industry and Islamic finance," he said in his virtual remarks at the D-8 Summit in Bangladesh, Wednesday, April 7, 2021.
He explained that the combined GDP of the D-8 is around US $ 4 trillion or 5 percent of global GDP. The total trade of these eight countries is around US $ 1.6 trillion USD or 4.5 percent of global trade. In addition, almost 50 percent of the total OIC trade comes from D-8 member countries.
"Imagine if we could direct this potential to support our halal industry, Islamic finance, and the Islamic economy," he said.
According to Mahendra, all member countries must use a number of initiatives to accelerate economic cooperation in this direction. "We also need to develop independence in our halal industry by developing a halal industrial zone and a hub in D-8," he said.
According to him, only by focusing efforts on existing comparative advantages, D-8 countries can achieve their goal of becoming the next economic powerhouse by 2050.
"Let us create momentum to defeat this pandemic in order to run our economy again and work together to achieve our noble goals 24 years ago," said Mahendra about the idea of ​​this halal industry.