Indonesia Reaffirms Its Stance on Myanmar 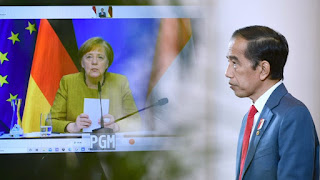 UMMATIMES - President Joko Widodo held a bilateral meeting with German Chancellor Angela Merkel virtually at Bogor Palace, Tuesday (13/04).
The two leaders discussed openly several bilateral issues, including cooperation in the fields of health, economic cooperation and climate change.
In addition, the issue of Myanmar has also become one of the topics of exchange of ideas between the two leaders.
Jokowi said that Indonesia's stance was very clear from the start, namely asking for an end to the use of violence and encouraging dialogue.
"It is hoped that dialogue between them can be carried out immediately, to restore democracy, stability and peace in Myanmar," concluded Jokowi.
Indonesia has also proposed holding an ASEAN Summit to discuss the issue of Myanmar and currently preparations for the summit are ongoing.

Jokowi shows off his achievements in controlling the pandemic

In discussing health issues, the two leaders exchanged ideas regarding the handling of COVID-19 in their respective countries. Both expressed their concern that the continuing occurrence of vaccine nationalism would seriously disrupt the availability of world vaccines and disrupt equal access to vaccines for all.
Jokowi said that positive cases in Indonesia have started to improve. Apart from being caused by health protocols that were continuously being implemented, he said the decline in numbers was due to the micro lockdown policy at the village level.
"In January, Indonesia's positive figure had reached more than 14 thousand in one day. Meanwhile, in the past two weeks, the positive figure is around 4-5 thousand per day, "said Jokowi.
Jokowi also explained about the vaccination program that has been started in Indonesia. Apart from Sinovac, according to him, Indonesia is currently also using the AstraZeneca vaccine.
Jokowi then emphasized the importance of the two countries building health cooperation going forward.

Meanwhile, in the investment and industry sectors, Chancellor Merkel saw the potential possessed by Indonesia to become an important partner for Germany. Jokowi said that investment plays an important role in economic recovery. "Indonesia has just issued a Work Creation Law which will be able to support cooperation in the investment sector," he explained.
Jokowi also offered cooperation in developing human resources through vocational schools and increasing German industrial investment to build Germany's global production base and supply chain in the region.
"I offer Germany to develop a special German industrial zone (German Industrial Quarter) in the Batang Integrated Industrial Zone," said Jokowi.

Regarding climate change, the two leaders also claimed to have the same commitment to efforts to reduce emissions in accordance with the commitments made by each country.
"Indonesia has a high commitment to green development," said Jokowi. One example is the ongoing efforts to develop both mangrove forest restoration and sustainable energy development efforts.

Germany is one of Indonesia's most important partners in Europe. Indonesia has had a comprehensive partnership since 2012. Germany is Indonesia's largest trading partner in Europe, the 4th largest investment partner in Europe and German tourists are the 3rd largest from Europe.
The bilateral meeting between Jokowi and Merkel was held a day after the opening of the Hannover Messe Exhibition 2021, where Indonesia was lined up as a partner country or partner country.
Merkel expressed her appreciation to Indonesia for being willing to become a partner country in the Hannover Messe 2021 and believes that this partnership will be useful for efforts to strengthen bilateral relations between the two countries.
Merkel also said that next year Indonesia will become the Chair of the G-20, while Germany will be the Chair of the G-7. It is hoped that the synergy of work priorities can be carried out well between the two countries.
"It is an honor for Indonesia to be appointed as Partner Country for the Hannover Fair 2021 and also later in 2023," said Jokowi.
Jokowi also appreciated Chancellor Merkel's leadership for nearly 16 years in enhancing bilateral relations.