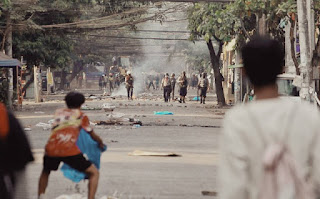 UMMATIMES - Myanmar protest leaders called for guerrilla action after the military junta shut down the internet on Friday after bloody days of military coup protests.
Hundreds of people have been killed protesting since the February 1 coup, and coup opponents have used social media to publicize the brutality of security forces and to organize resistance to military rule.
Following the imposition of new internet restrictions, which limit web access to fixed line services only, anti-coup groups are sharing radio frequencies, offline internet resources and text message news alert providers, to keep communications going, according to a Reuters report, April 2, 2021.
The Myanmar military did not announce or explain its orders to providers to cut off wireless broadband. Mobile data has been blocked for weeks by the authorities to silence the opposition demanding a return to civilian rule and the release of Aung San Suu Kyi and other key figures in his government.
Security forces opened fire during Friday's protests in the central Sagaing region near Mandalay, in which four people were shot and wounded, two others critically, according to three local media organizations.
A witness told the Monywa Gazette that the police shot from the top of the hill. Adding to the chaos in the former British colony, formerly known as Burma, hostilities between the armed forces and ethnic minority rebels have broken out in at least two areas.
Across the country, demonstrators staged "flower strikes", laying wreaths, some with slogans of resistance to the military, at locations such as bus stops, where activists killed by security forces had departed on their final journeys.
People raised roses while saluting three fingers, a symbol of resistance. All seats at the stop were covered in flowers and anti-coup messages.
A series of dandelions and red roses on the lakeside walkway reads "Myanmar bleeds". "The next day, there were street protests. Carry out as many guerrilla attacks as you can. Please join in," Khin Sadar, a protest leader, wrote on Facebook in anticipation of the blackout.
"Let's listen to the radio again. Let's call each other too," he said. It is unclear how widespread the internet blackout is, as images of the march, the flower-laying action and the funeral of a murdered protester are still being uploaded and shared on social media.
Protesters wearing masks depicting deposed leader Aung San Suu Kyi, pay a three-finger salute as they take part in a protest against a military coup in Yangon, Myanmar, February 28, 2021. REUTERS / Stringer
Aung San Suu Kyi and four of his allies have been accused by the junta of violating the official colonial-era secrets law, his lawyer said on Thursday, the most serious accusation against him so far. This offense is punishable by up to 14 years in prison.
Aung San Suu Kyi's lawyer, Min Min Soe, attended the hearing via Suu Kyi's latest video channel on Thursday, Soe was unable to say whether Suu Kyi was aware of the chaos in Myanmar.
Some 543 people have died in the anti-coup protests, according to the advocacy group Association for Political Prisoners (AAPP), which tracks casualties and detentions. The military junta has repeatedly said those killed sparked violence.
Protesters were on the streets of several city centers day and night on Thursday, burning copies of the 2008 constitution after Suu Kyi's emergency government, formed after the coup, stated that it had withdrawn the military-drafted constitutional charter.
A video, widely shared on social media on Thursday evening, shows an unconscious man being kicked and beaten by a group of seven men in uniform with rifles, then taking him away.
Another widely shared image shows hundreds of candles burning on the street in the dark, forming the words "we will never give up".
Britain on Thursday imposed sanctions on a military conglomerate, following similar moves from other Western nations. Fashion brand Next announced it was suspending orders from the Myanmar factory.
"The military has sunk to new lows with the arbitrary killing of innocent people, including children," said UK Foreign Secretary Dominic Raab.
Neighboring Myanmar, which is Myanmar's main trading partner, has not imposed any embargoes, but several have issued firmer statements after security forces killed 141 people as Myanmar generals celebrated Armed Forces Day on Saturday.
Thailand, which has good relations with the Myanmar military, said the country is very problematic. A harsher response has come from the Philippines, Malaysia, Indonesia and Singapore, whose foreign ministers have met separately this week with their Chinese counterparts, which is one of the few countries that can influence Myanmar's general.
In a transcript of the interview available Thursday evening, Singapore's Foreign Minister Vivian Balakrishnan said she was worried and shocked by the violence, and China also wished for peace and dialogue in Myanmar.