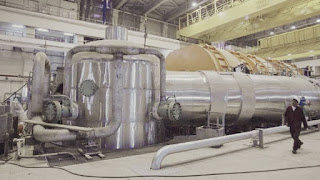 UMMATIMES - The head of the Atomic Energy Organization of Iran (AEOI) said that Iran has produced 50 kilograms (kg) of uranium enriched by 20 percent, as reported by Press TV on Saturday (3/4).
The 20 percent uranium enrichment process was launched as part of Iran's Strategic Action Plan to Counter Sanctions, which parliament approved in December 2020.
According to the parliament's draft law (RUU), the AEOI must produce 120 kg of uranium enriched by 20 percent within a year after the implementation of the action plan which began on January 4, said Ali-Akbar Salehi.
Iranian authorities say increasing uranium enrichment, along with other steps to reduce a number of commitments under the 2015 nuclear agreement, formally known as the Joint Comprehensive Plan of Action (JCPOA), are a form of reaction to the withdrawal of the United States ( The United States) from the agreement and the failure of European participants to protect Iranian interests amid the imposition of US energy and banking sanctions.
"If there is an agreement and the US re-joins the JCPOA, then Iran verifies it, Tehran can immediately stop 20 percent uranium enrichment and other expansion," said Salehi.