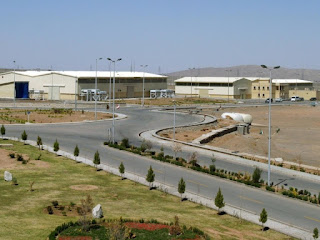 UMMATIMES - Iranian Foreign Minister Mohammad Javad Zarif accused Israel of being behind the attack targeting the Natanz nuclear facility in central Isfahan Province, Sunday (11/4/2021).
The incident in Natanz was concluded as an act of sabotage of the electrical installation. However, the sabotage did not have a significant impact. Iran is continuing its uranium enrichment efforts, which in a few steps could lead to Iran's ability to produce a nuclear bomb.
Mohammad Javad Zarif made the allegations after meeting the Iranian Shura Council National Security Committee. This was quoted by the Islamic Republic News Agency (IRNA).
During the meeting, Zarif provided a detailed report on the Vienna talks that took place last week. Zarif said the need for the attention of elites and citizens, so that they do not fall into the trap set by the Zionist entity (Israel).
He explained that the Zionists want to take revenge on the Iranian people for the success they have achieved even under an unfair embargo. "But we will not allow this and we will take revenge on the Zionists for their practice," said Zarif.
Zarif stressed that Zionist entity officials had publicly stated they would not allow any progress in lifting the embargo on Iran. He said Israeli leaders imagined today they had achieved their goal, but they were wrong.
"The Natanz nuclear facility today is stronger than ever, and if the enemy imagines we have weakened in nuclear negotiations, what will happen is this cowardly act will strengthen our position in the negotiations," he added.
Late Monday, Israel's Kan news channel reported that according to an unnamed intelligence source, the Israeli intelligence service (Mossad) was behind the attack on Iran's nuclear site. Later, the same channel quoted Israeli intelligence sources as saying the damage caused to the large Natanz nuclear facility.
Centrifugal equipment of various kinds was badly damaged, suggesting the attack undermined Iran's ability to enrich uranium. In Jerusalem, Israeli Prime Minister Benjamin Netanyahu said his country would not allow Iran to have nuclear weapons. During a joint press conference with the US Defense Secretary in Tel Aviv, Netanyahu said, as reported by Sputnik Arab, Iran continues to threaten us, and has never stopped its efforts to develop nuclear weapons.
"Iran should not acquire nuclear weapons, and I will not allow it to develop nuclear weapons to eliminate Israel," he said
US Defense Secretary Lloyd Austin insists his country is committed to ensuring Israeli security and military superiority in the region. Israel's Defense Minister, Benny Gantz, said Tehran posed a threat to international security. He pointed out that his country is working with the United States to ensure any agreement with Iran will serve the interests of both countries. Gantz stressed that at a press conference with his US counterpart, Lloyd Austin, in Tel Aviv on Sunday, Tehran posed a strategic threat to international security and the entire Middle East region.
Defense Secretary Lloyd Austin arrived in Israel Sunday, on the first visit of a senior Biden administration official, whose attitude toward Iran has alarmed Netanyahu's government.
Washington is trying to reassure Israel about issues related to regional security by resuming Iran nuclear talks. In Tehran, the head of Iran's Atomic Energy Organization (AEOI) Ali Akbar Salehi announced the incident at the nuclear facility in Natanz was an act of sabotage.
"The incident (Sunday) yesterday at Shahid Ahmadi Roshan's enrichment facility in Natanz is clearly an act of sabotage, and our security agencies have found good leads on this," Salehi said.
He explained Shahid Ahmadi Roshan's site emergency power system was back in operation today, and the main power system would be connected in the next few days.
"The enrichment at Natanz will continue in a strong manner," said Salehi. He added Sunday's incident had nothing to do with the incident at the centrifuge assembly center in Natanz last year.
Salehi said the enemy wanted to sow despair and despair in the hearts of the Iranian people but the efforts were in vain. An Iranian official said Monday the Iranian intelligence ministry had identified the person who had caused the blackout at the enrichment complex at Iran's Natanz nuclear installation.
"The identity of the person who caused the blackout in one of the halls of Shahid Ahmadi Roshan's enrichment complex in Natanz by interfering with the electricity system has been identified," said a source in the intelligence ministry.
"The necessary actions are being taken to arrest the main person who caused the disturbance in the Natanz complex power system," the official said.
The Natanz Fuel Enrichment Plant, covering 100,000 square meters and built eight meters underground, is one of Iran's few facilities. Salehi said his country has the right to take action against the perpetrators of sabotage in Natanz. "The Islamic Republic of Iran has the right to take action against the perpetrators of this heinous act," said Salehi.