Is Israel's Defense Weak Against Drones? 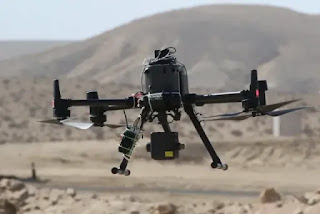 UMMATIMES - Israel's protection against drone or drone attacks is very poor. According to a report by State Financial Supervisory Agency Matanyahu Englman, the poor protection has led to mutual blame on who is responsible for exposing the country to dangerous threats to national security.
Based on the report, the period from October 2019 to June 2020 found that up to 78 percent of Israeli soldiers lacked protection from drone attacks. Englman said that as of July 2020, there were 30 thousand drones operating in Israel and had carried out 90 thousand flights in the Tel Aviv area over the past year. Most of them are not listed. Israel does not have the technology to keep up with or impose restrictions on such drones.
"Extending the use of drones brings many advantages, but there needs to be constant advances in technology and ease of regulation to deal with growing security, criminal and safety threats, which include dangers to human life and national security," Englman said in the Jerusalem Post.
There is sharp disagreement about who is to blame, especially since the issues highlighted in the report were raised in 2017. Disagreements over authority cover a wide range of aspects, from lack of information sharing and sharing of responsibilities.
Englman recommended that the police and the Civil Aviation Authority work together to build real infrastructure to prosecute individuals for drone-related crimes. The report sharply criticized Israeli authorities for moving operations away from the Israeli capital Tel Aviv.
According to Englman, moving the Israeli capital had damaged the capabilities of military intelligence, because they moved most of their units to the Beersheba region without considering the mobility of intelligence personnel. About 93 percent of the intelligence staff who were supposed to work in the south did not live in the Beersheba area.
Most of the intelligence staff with families could not move easily. Therefore, the report warns of high-ranking intelligence officers to move to the private sector to avoid having to move to the south.