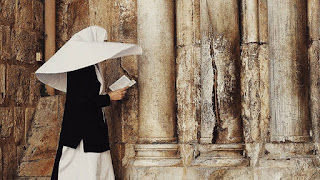 UMMATIMES - Archaeologists from the Israel Antiquities Authority say they have solved the mystery of the thousands of crucifix carvings on the walls of the Church of the Holy Sepulcher in Jerusalem, where Jesus is believed to be crucified.
Researchers suspect pilgrims in the past carved these crosses when they came there. This is to indicate that they have been there or like a person who carves his name on a tree trunk.
"This unique phenomenon has always puzzled us. Whether it is a carving of pilgrims, or rather, something else," Amit Re'em, head of the IAA's Jerusalem District, told Reuters.
The renovation work at the church allowed archaeologists to examine the carvings up close. They used 3D imaging and digital tools to examine and determine when the engravings were made.
Archaeologists are aware that these thousands of crosses were all made by a handful of people. "We saw that all the crosses had the same depth and even the markings of the masons," said Re'em.
He said that in ancient times there may have been two or three people who carved the crosses. "So this isn't graffiti, it's something that's more organized."
According to Re'em, it had become a habit for pilgrims at that time to pay a craftsman to carve the cross, "Say you are an Armenian pilgrim, so you pay something to the priest, to this particular artist and he carves a cross for you, for the benefit of your soul and the soul of your relative. A special cross in the holiest place for Christianity on earth," said Re'em.