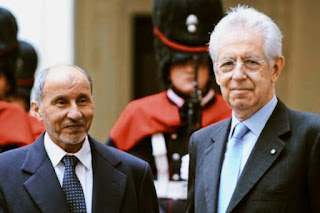 UMMATIMES - Italian Prime Minister Mario Draghi said it was time for Italy and Libya to rebuild their old friendship. This requires a sustainable ceasefire in the North African country.
Mario visited Tripoli, Tuesday (6/4), on his first international trip as head of the Italian government. He had a lengthy meeting with Abdul Hamid Dbeibah, Prime Minister of Libya's transitional government in charge of leading the country until general elections scheduled for the end of 2021.
"This is a unique moment for Libya. There is a national unity government passed by Parliament which is pursuing a path of national reconciliation. This is a unique moment to reconstruct a longstanding friendship," Draghi said at a press conference with Dbeibah.
He described his meeting with Dbeibah as a very satisfying visit. "We are talking about cooperation in the fields of infrastructure, energy, health and culture," he said.
Mario said the Italian Embassy in Libya was never closed even during the most difficult times for the country. He said that this was clear evidence of the importance of the relations between the nations which had been formed.
He promised that Italy would increase scholarships for Libyan students and the activities of the Italian Cultural Institute in Tripoli. "There is a desire to make this partnership a driving force for the future, with full respect for Libyan sovereignty," Draghi said.
"There is a desire to see trade and cultural exchange return to levels five-six years ago, and far above it," he added.
Dbeibah hopes to increase collaboration between Italy and Libya in the field of energy and electricity production. He recalled the contracts that had been signed between Libya and Italian oil and gas company ENI. "We can move forward in the realization of the real development," he said.
A diplomatic adviser to Draghi told Arab News he was the second Italian prime minister to choose Libya as his first foreign visit, even before Germany or the US. He stressed this was a good sign for the future relations of the two countries.