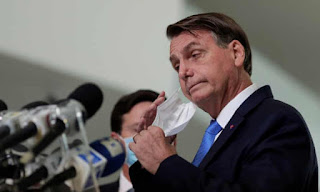 UMMATIMES - Brazilian President Jair Bolsonaro on Friday made a controversial statement, saying the Brazilian military would take to the streets following his orders to restore order.
Jair Bolsonaro's statement has led to accusations that Bolsonari wants to politicize the armed forces.
Quoted from Reuters, April 24, 2021, Bolsonaro said during a TV interview that he would not elaborate on what he had prepared. But he said that "if we have a problem, we have a plan on how to enter the battlefield ... our armed forces can one day take to the streets."
The comments of Bolsonaro, a former right-wing army captain who has long praised Brazil's twenty-year military dictatorship, will do little to defuse critics who worry about the politicization of his military. Others fear Bolsonaro is reluctant to hand over power peacefully if he loses next year's presidential election.
Jair Bolsonari is under increasing pressure because the corona virus pandemic in Brazil is getting out of control.
It has faced widespread criticism over its handling of the outbreak in Brazil, which has the second-highest death toll from the coronavirus in the world after the United States.
Last month, Bolsonaro put his former chief of staff in charge of the Ministry of Defense and swapped the three armed forces commanders as part of a cabinet reshuffle, which shocked senior military officers.
Since his victory in the 2018 election, Bolsonaro has made baseless accusations of election fraud in Brazil, which critics say could provide a basis for challenging upcoming elections on the same vein as his political idol, former US President Donald Trump.
Jair Bolsonaro supports Trump's unsubstantiated claim that there was rigging in last year's US presidential election, which culminated in a deadly January 6 attack by his supporters on the Capitol building in Washington.